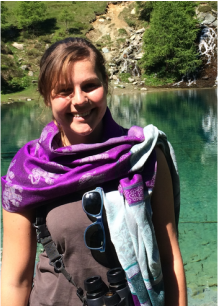 Research
I am broadly interested in evolutionary processes that shaped biodiversity as we know it today, and the conservation of the latter.
At the University of Tübingen I became interested in the evolution of red fluorescence in marine organisms. Since then animal colouration and its role in speciation events has fascinated me.
During my master’s thesis on red fluorescence in wrasses I realized that phenotypic divergence often outpaces genetic differentiation (e.g. Brawand et al. 2014, Allen et al. 2015)  and I became further interested in the genetic basis of colouration.
For my PhD, I am now investigating the repeated evolution of stripe patterns within cichlid fishes.

Many of the colour patterns we find in cichlids have evolved repeatedly in different species. Yet, still little is known about the genetic changes that are necessary to generate these traits.
Using state-of-the-art molecular and developmental biology approaches I hope to gain a first insight into the genomic substrates of the repeated evolution of an adaptive trait in this famously diverse family of fishes.